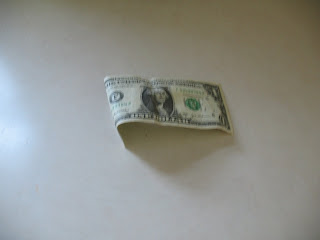 The other day I was at the the mall, I walked over to Burger King at the food concourse and ordered a Dr. Pepper. The cashier filled me up a cup and said "here you go". *I* said, "What your not taking my money"? "No, that's alright" was the answer. I said, "you sure?" "Yes, I am sure, have a nice day" "Alright, thanks", I said.

Alright so I attempt to pay it forward (yano pass on the same good deed) the woman behind me just arrived and did not see or hear any of what went on so I attempted to give her a dollar toward her bill. I know it's not much but hey she had 2 small girls so any bit should be appreciated. I asked her if she ever heard the saying pay it forward, and she had, so I explained to her I wanted to help toward her bill. SHE REFUSED!!

Next woman behind her heard this whole thing, she looked well off and she too didn't want to take it, I told her I was trying to pay it forward and to please give me some help here. (with a smile) she cautiously took it and said she would donate it someplace. I said that was awesome.
she ate her lunch and waved bye to me as she left.

Just last night I was at McDonald's and I didn't take my purse, I had cash in my pocket but was short 17 cents. lol, I asked the cashier if he would take $8.00 he just looked at me. The guy waiting for his food offered me some change. Wasn't that a nice thing. I was embarrassed but what could I do. I told him he was very kind and to have a fun evening.