On Labor Day he was out with his friend ridding and his friend came up in front and cut him off, by accident. At 40 MPH. Eric was wearing full ridding gear. Amongst other things he had to have surgery:

Update on my brother (Eric) extensive spinal stenosis (narrowing of his spinal cord) Because one of his cords was messed up and slowly deteriorating over the years and his ATV accident made it worse he had surgery to prevent paralosis if a future accident occured. They went in through the side of his neck to attend to his lower vertebra's and one of his cords.

This is the report I got from my sister after his surgery yesterday (9-23-10) It was nearly a 2 hr. surgery, but it went well.

Eric, I love you. 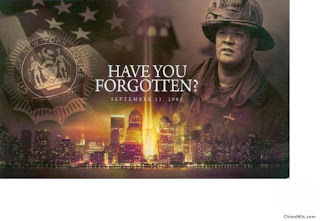 No, I have not forgotten the 3,000 men, women and children who lost their life on this horrific day. I will never forget this day as long as I live. I have not lost anyone personally, but I feel for each family who's life was changed on that day. May God bless each one of you, and may you always feel Him near your side and in your heart.
Lori

I thought I'd share a little bit of info on those pesty, nasy, blood sucking, West Nile virus bugs:
Mosquitoes are attracted to the color blue twice as much as to any other color. Also, the female is the only one that bites!
Posted by Lori at 9/09/2010 04:56:00 PM No comments:

Labels: did you know

I will be up and running this week, back in full swing, come follow me on my random thoughts on various topics and our grandchildren's crazy adventures.
Posted by Lori at 9/09/2010 02:31:00 PM No comments: