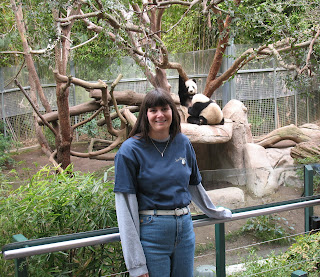 Here is one of the events that we did while on our Valentines Day/Christmas present get away. We arrived at the S.D. zoo at 10:00 a.m. and zipped off to hunt down the panda bears. The baby panda was sleeping in the tree branches curled up in a ball. I call that boring. The mama was walking around, climbing on a tree and thinking about getting in the small pond she had, much more exciting; however, I found it odd she was not eating bamboo while we were there. In Memphis we learned that panda's eat 40# of bamboo a day and I'd believe it as they were munching on it constantly(in Mem.). But after observing I'd guess 30-40 minutes and not seeing her eat a bite, I wonder.

Anyhow, I was so excited to be there I got a little teary eyed just as I did in Memphis. We took a bunch of pictures and moved on thru the rest of the zoo. The amazing mural was painted by a lot of kids some as young as 4!

Later, I had to see them again and when we went back the line was just like at an amusement park, it zig-zagged back and forth. There was no way I wanted to wait that long considering we were very close to the zoo and had a 5 day pass, we quickly decided to hit the gift shop and come back first thing in the morning. The plan for Sunday was we would check out the panda's and get out of the zoo and head for Sea World.

We only took 90 pictures the first day but the second day we doubled it, we took 180 PANDA pictures in 2 days, is that a lot?

Nearly no post of mine would be complete w/o pictures so here they are: 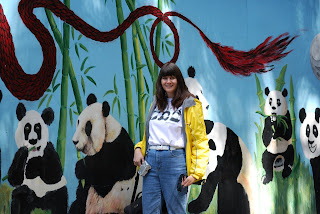 Me on the first day, notice my Memphis Zoo panda shirt 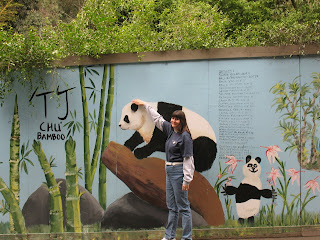 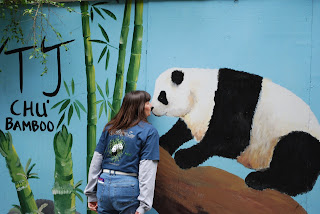 Now for a kiss from Lori 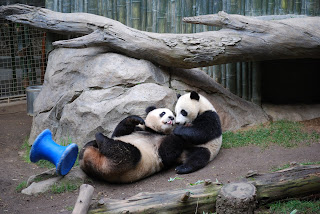 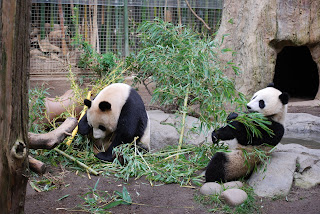 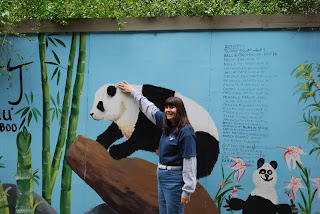 One final pet before we leave 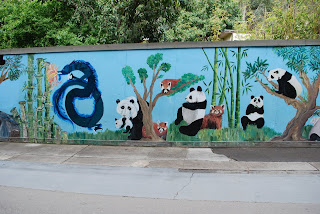 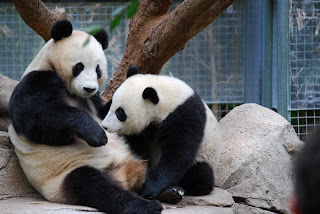 Haha you and your pandas! Looks like you had a great trip. When you plan your Atlanta panda adventure, keep me posted and we'll come along with you. Rosie loves zoos.

I am already counting on you guys to join us at the Atlanta zoo.

My next post is a doozie! I am totally not happy right now, I had a good chunk wrote and my computer went crazy and I lost it. Guess that will keep me busy for Monday. Cripes!