"Are You Really Taking ME There!?"

A little over a week ago Sam came up to the computer room while I was on and he wanted to print something. I thought it was a little off his normal routine because *I* was on and he has his OWN home office which contains anything and everything he could possibly need, so why bother me. He gave me a lovely new computer,monitor and printer/scanner/copier for Christmas so maybe he wanted to print off of the new stuff. Who knows.

So now he is hovering over my shoulders typing and doing this and that and I see 3 words that catch my attention, like you could pick out your name in a big sheet of a hundred words, it interest you so it catches your attention. I scream "your really taking me there!" He says he doesn't know what I am talking about and then I tell him what I saw, by now the printer has spit out 2 sheets, he asks me to grab 'em.

Here is what they were! 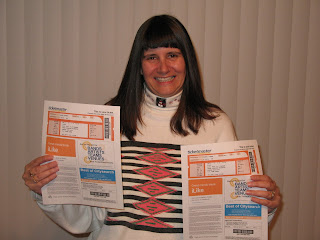 He gave us two tickets to see the Trans-Siberian Orchestra, for the very next day! I had minimal wait time and totally enjoyed the show. We had center stage floor seats. They lost power about 25 minutes into it but kept us entertained (we sang a few Christmas songs) while men worked feverishly getting all power restored during the next 15 minutes.

Something else wonderful happened to me that same day:

Before the concert started we were in the concession line and I hear my name being called. I turn around thinking it's for somebody else but what if they're calling ME. To my delight, It was my very first friend I met when we moved here 18 years ago. We had spent numerous hours together while our little girls were growing up, we went on vacation together, movies, sometimes even church, out to eat and a million other things. We had a good 10 minute conversation while in line and an hour long phone call later in the week. We both are eager to meet up again and get reacquainted.
Posted by Lori at 1/11/2009 02:27:00 PM

How awesome! TSO has some great music, I'm sure the show will be fantastic!

I LOVE TSO!!! I'm so happy for you! (and a little jealous!) I'm glad you had a good time and caught up with an old friend!