On Thursday, Tom, my friend called and asked me what I was doing tomorrow. After thinking about the things I needed to accomplish I said I was doing “nuth’in” after 10:00 A.M. He asked me if I would give him a hand over at church spreading mulch. Stated he needed to dig out some weeds and I could spread the mulch. So I said ok. Oh one more thing…he couldn’t get started till noon, (the heat of the day). I told him I was not happy about that but I’d still help out.

I meet him over there and he is already started digging out weeds and let me tell you, it was a mess. He already had a wheelbarrow full of dirt and weeds, he takes me on this long journey passing up what I call great dumping spots and we finally get to “our dumping spot”. Good grief, it was way out of the way!

But okay, we go back and we’re both hot but we need to continue to get this task done. I get out my water bottle and take a drink. Now I feel better, I can get this done. I start to rake up some weeds while he digs `em out. I told him I would go dump the next load.

On my way back I had to sit on the ground and take a rest. It was too hot and too far and too much labor, my heart was pounding. So I get back to Tom and he has some weeds dug out and ready for the wheel barrow. He tells me I can sprinkle Preen on the ground before the mulch. Yippee, finally something easy for me. I get the Preen down and attempt to dump mulch; the bag was too heavy for me. Tom sees me struggling and dumps the bags of mulch for me in various areas along the now weed free spots. Another trip to dump weeds and dirt, this time I didn’t need a rest before returning back to the work site but nonetheless, I fuss, “it’s too hard”. Tom suggests I just sit down and take a break and keep him company while he works. I feel bad `because I am already complaining and Tom has worked so hard with the shovel that he already has an open blister. A couple minutes later he attempts to sit down too. His heart was a pump`in too. That’s when I suggest “let’s go inside, in the A/C and get some cold water and sit a bit”. It was 90 degrees and very humid. This continued for 4 hrs. (working and sitting and pump’ in) Finally the site was weed free and beautiful again. Time for a treat, off to UDF where Tom bought me a chunky banana malt. Yum.

Since I am not in the habit of hauling the camera with me, I had to go for a walk in the neighborhood to find a mess very similar to the one we encountered. But since I am blogging, hey, I might as well share what is happening in my life. Now I think I need a camera phone so I can take a shot when I am into something I want to share. You can click on the pictures to enlarge them. 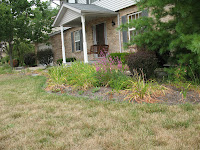 And of course the finished results: 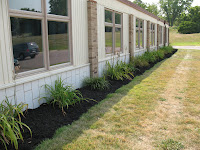