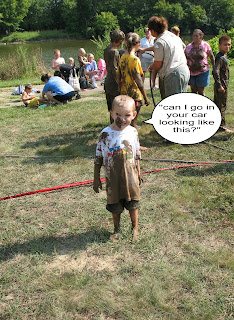 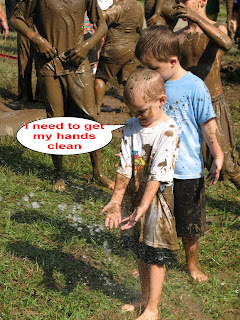 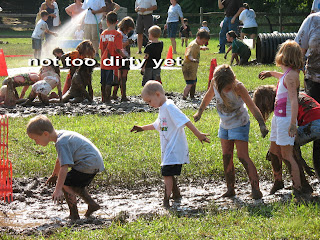 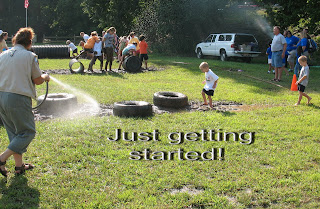 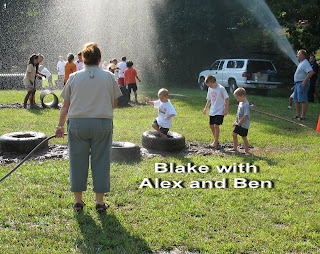 Lisa, my friend, requested a story on mudfest so here it is:

Mudfest: An annual event at the local park where children and adults (if so desired) maneuver through an obstacle course through running, walking and crawling over, under and thru tires, tubes and the like.

My daughter is one of the few qualified to run the daycare van where she works (as the book keeper). She was bringing the 7 and up year-olds to the park. I asked her if she could bring Blake along and I'd be there to watch over him, after all, she was just dropping off kids and their teacher would be watching over them. Blake was excited about riding in the daycare van, he rarely gets to do that since his class seldom goes in the van, (they take a chartered bus when they go places).

I was anxious to see if Blake would get muddy this year. He is 4, but last year he did NOT want to do THAT! He came prepared...wearing old clothes and sneakers that could easily be discarded and good thing he did! Clean clothes and good shoes were in his backpack. Most kids were shoeless so he took them off anyway.

Anyway, my friend, Lisa met me down there with her 3 sons. Blake stood in line eager to get muddy with Lisa's three. I was thinking...as long as Ben, Lisa's 5 year old, a.k.a. Blake's "new best friend" (we were out with them earlier in the week) was following his two older brothers, Blake would be a part of the muddiest kids on earth day, or at least in THIS town.

Blake was a great sport, he followed along walking through deep mud, at times up past his ankles. It was so much fun to watch him kinda waddle his way through. I think I had as much fun as he did. He was laughing and kept doing the course over and over. So much better than last year.

While walking back to the car he informed me, "I do NOT want to do this never ever again, gramma!". I told him "That's ok, you don't have to, but I know you had a lot of fun today". Personally, I think he was a bit annoyed at the cold, wet clothes clinging to his body. Back at the car...I took off his shirt, tried to convince him to let me take his shorts off but he refused, laid a big thick blanket over his car seat and over the back of the passenger front seat, to keep muddy feet off seat. *I* put him in his seat, (after all, if he climbed in; there would be mud all over) and told him to just sit still while I drive up the road a very short distance to home. He said, "but gramma we don't want the police man to pull you over", letting him know he was exactly right, I reminded him this is a one time thing and he needs to sit still so he looks like he is buckled in. I would never put him in harms way. I think I went 15 in a 25 mph.

I get him out of the car and finish stripping him naked, carry him through the house, up the stairs, and finally into the tub. He tells me he wants a bath but I tell him he first needs a shower to rinse off what we can.

Now he is in the tub, and decides he wants to go back to school (daycare). By now the kids in his class are just about finished with their lunch and getting ready to settle down for their naps. I try my darndest to convince him it's nap time at school and it'd be no fun. "I'll take you back after nap is over". (I HATE telling him "no" when the subject isn't that big of a deal). That doesn't work, he starts trying to convincne me to take him to school. *I* think he wants to go to tell his friends all about his muddy day. He asks to play with his toy boat in the bath and I tell him playing will take too much time and you won't be able to get to school before nap time starts. Luckily, he decides the boat is more fun. Whew!

Meanwhile, I call Jennifer (his mom) and tell her all about our adventure, she is anxious to see the pictures and video, she just can't wait till after work, she comes in a half hour during her lunch time. I warned her that Blake would probably want to go back to school with her if she came. Of course I was right but we reminded him it was nap time and he could take a nap on grandmas couch, instead of in his bed (at my house). He was cool with that idea. And I was cool with the 3 hr. break. Blake is excellent at taking long naps. He will easily take a 3 hr. nap and I still have to wake him up most days.

Check back for pictures in a day or two, not sure if I can get them up today.

For those that don't know me real well... when I am experiencing a "BLAKE ATTACK" I sometimes have his parents drop him off to me in the morning and then I keep him all day or I will go pick him up at daycare either in the morning or usually after nap time. But for the most part, he is a daycare boy. I think he enjoys learning and being around other kids. However, given the choice he will usually, but not always choose grandmas over daycare. I truly enjoy all the time we spend together and seeing how Blake is rarely READY to go home I think he feels the same way.
Posted by Lori at 8/29/2008 01:35:00 PM

Mudfest looks like a blast. I remember in high school having a big mud wrestling activity and it was so fun. Even though I scrubbed up well in the shower, I was finding dirt on me for about a week after.

Welcome to blogging, by the way!

Thanks. I think Blake will be back at it again next year. Getting the print sit on the right line and correct spot is tricky but I'm getting better at it. It PUBLISHES different than it appears in PREVIEW.